Ulrike Mueller co-founded Demandware (now: Salesforce Commerce Cloud) - the first enterprise grade eCommerce platform distributed in the SaaS model. They needed to build everything on their own (including cloud hosting) and in this episode you will learn what those early days looked like. What it was like to build software in the '90 vs. now? What's the recipe for the product-market fit? How you build a succesfull product's team on the edge of customer vs. developer needs?

Piotr Karwatka: Hello everyone! Welcome to the next episode of our podcast. I'm super excited to host Ulrike today. She's the co-founder of Demandware, a currently well-known Salesforce commerce cloud. After leaving the company she worked as a CTO at new store and now she's advising really cool product companies and serving as a board member to them. But it all started in the 80’s, with the first 8-bit computers and hacking them. Ulrike, I’m really happy you accepted my invitation.

Ulrike Mueller: Hey! Thank you for having me on your show.

Piotr Karwatka: Let’s go back in time a bit. Do you remember your first computer?

Ulrike Mueller: Yes, actually it was a c64 (Commodore 64), so the 80's 8-bit home computer times. That's why I sometimes say I’m an 80's computer kid and actually the c64 was not my first computer. At school we had the these Commodore PET looking machines these, 4016, that's actually the computer where I wrote my first programs.

Piotr: How did your adventure with programming start on Commodore?

Ulrike: Pretty much yeah, but you had to think in advance to keep enough distance between the numbers so that you could insert something, so those were just funny times.

Piotr: yeah very, very funny. I think that maybe not all of the listeners remember those times, but it also revised me how you you’re your fourth run development right.

Ulrike: It was pretty much the same and this kind of stuff. I guess the joke is that today, you have Github, back in these times you had a cassette recorder to keep destroying your programs [Laughter]

Piotr: yeah exactly, so the only kind of cloud you can put it in with your you know shelves, or storage to save their pockets. So what led you to your first job as a as a computer programmer?

Ulrike: actually in that sense I never had a job as a computer programmer so because out of these, a lot of the people who started in those times could make something out of their skills. So I studied computer science but basically on the side I was programming something and already distributing it. So one thing was, I had a little software for the c64, which was sold through the Cybex Publisher, and that way I made some of my first money. I was basically self-employed and later I worked for a company where I had a CAT program. It was also basically a situation freelancing and then having a publisher. Distributing that one, it was a common model in the let’s say late 80s, 90s where, there was such a uh demand for just to get software to do something with these machines and people were excited and that's how I was basically a part of this ecosystem. And so in that sense I never looked out for a job as a programmer.

Piotr Karwatka: actually funny because you know my experience with the computer software started very similarly I think a little bit later it was like the late 90s but actually I also had a publisher who was releasing the software. It was Delphi Windows Software on cd’s uh not cassettes but the model was exactly the same, so I get it. It’s really cool that you had

this full control over what you are building right from the product design optical right and at the end. It mimics what you today have in software companies all the different roles so in that sense

I know what is one software I was looking at. I think that's what overall I’m still drawing from these the skills I learned there, that I can reapply them also in, a larger scale so we can say that it forms your way of thinking about software development and of working in general right? That also influenced how you actually program, like building the software itself. This is something we were discussing before this interview that being this computer kid in 80's uh changed the way you think about the coding itself. Even now the one thing what it taught me is to figure it out so,at that time you could buy a book. There was no internet where you can google something, there was no stack overflow and stuff like that. And you had a book and at the end you had to figure it out. And it basically taught from that side that I could go basically the technology stack up and down then I know what assembly programming is. But also, on a higher level, so it taught me some really fundamental things where I can still can go mentally up and down the stack and i basically had to learn to to figure it out when i compared nowadays you’reusing so many libraries and you are basically assembling so many libraries. With every library you have to learn the library you have to you have to learn the mental model of the author of the library and then when you use five libraries every author uses a different mental model. So from that side the past it was fairly figuring out something technically and fairly structured and logically and now you're looking at frameworks and there is an opinionated model behind how the abstract model behind the library. So that's what but i think that's a huge difference between in the past and nowadays that's really interesting.

Piotr Karwatka: Let's uh go back to your career. As you said you pioneered observings, you know beginnings of many, many different trends and things. One of those trends and actually uh a big thing was e-commerce itself because you uh got into e-commerce very early.

Ulrike: I'm not sure but it was probably the same time, the same year amazon was launched and uh they moved over to these framework enterprise object and then web objects and so what we actually worked on, we did a project on web objects, and then it was kind of a natural move. People want to do on the web beside building a static web page they wanted to do some transactions and that's how basically without strategically planning it, that's how I got into it into e-commerce

Piotr Karwatka: Wow that's interesting!So it's kind of good luck and coincidence you entered e-commerce in the eve of e-commerce growing. Which allowed you to become the chief architect at Intershop. How did this happen?

Ulrike: This happened as I knew the founde rof Intershop already for

several years even before I met him the first time in late 92. So the whole team of the company where I worked had a relationships to the company

product which actually was later spun out and became e-Pages. That’s the first generation product and when I joined in late ‘97. There was the mission to build a next generation product which then became first. It was first called in the shop Infinity and nowadays is in the multi side and so that was a completely new development in ‘97, as kind of a second technical generation and the internship was assembling a team at that time and that was also the time when I joined and basically joined immediately that next generation team.

Piotr: Awesome! so how many people worked there, when you joined Intershop?

Ulrike: Intershop had 70 people at the time and was aggressively building up. And Intershop Infinity was built by a team of 20 people, so at the launch time maybe a little bit product management and supply. It was a period of roughly one and a half two years to build this this is awesome really you know nice time frame

Piotr: Was it java or some different technology?

Ulrike: it was completely java, and when you think about it, it was crazy. We were starting on uh jdk 101,where you had barely any collection classes and it was pretty basic, but we were all excited about the technology, and at the end we proved it was the right choice. 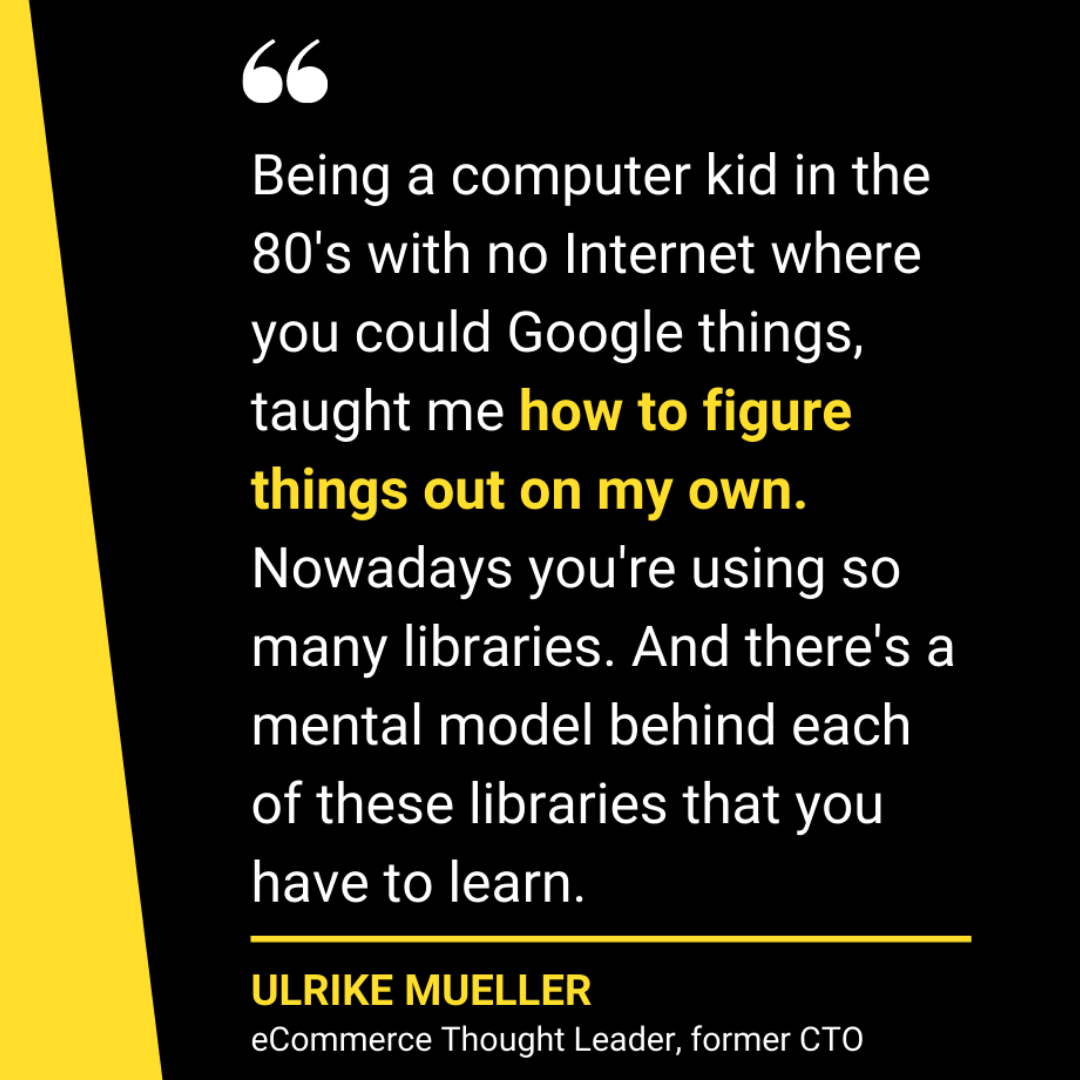